As I find myself happily ensconced in an academic setting nowadays, relieved of the daily duties of a liturgical musician – and missing them deeply, especially during Holy Week and Advent – I am aware of myself taking an increasingly passionate interest in the riches of Anglo-Catholic liturgy. In the past, I have created musical settings of The Advent Prose and The Anthems At The Mandatum, which have been useful additions to Advent Sundays and Maundy Thursday respectively. Often, I have found inspiration in the plainsong melodies associated with early sung versions of these texts, as in my eight-movement sequence for Christmas entitled Alleluia! Puer Natus Est Nobis.

The “O” Antiphons are seven Magnificat antiphons used at Vespers during the last week of Advent. Each antiphon is assigned to a specific day between December 17th and December 23rd.  During the past seven days, I have set myself the task of composing a musical setting of each of these antiphons, as they reflect on the prophecy of Isaiah and the coming of the Messiah. I decided to compose my setting of each antiphon on its assigned day, and devised a rhythmic, melodic and harmonic scheme for each, giving the set of seven a unifying progression. This progression is explained in detail below. While I approached these self-imposed constraints with a distinct level of freedom, I was able to use the pattern to give my creative process some form and structure. I hope that this has resulted in beautiful music, transcending any technical aspects of the task at hand.

Each of the seven antiphons opens with a straightforward statement of the initial words (O Sapientia, O Adonai, O Radix Jesse etc.) using the same musical material for each, based on the Gregorian Chant melody. After this, each antiphon takes on a character of its own, using key signatures that rise in complexity, moving from E minor (one sharp) to A sharp minor (seven sharps) which is notated as B flat minor in this case, for ease of reading. Time signatures for each antiphon become less complex as the set proceeds, moving from 7/8 to an unusual 1/1. Additionally, each antiphon features – to a greater or lesser degree – a certain interval. These move from octaves (and unisons) through 2nds, 3rds, and all the way to 7ths for the final antiphon. The central movement, O Clavis David, achieves a happy coincidence of numerology where, as the fourth piece in the set, it has four flats in the key signature, the time signature is 4/4, and the interval of a fourth is featured! Details for each antiphon are presented below, along with the texts and translations, and the first page of each piece.

My settings of the Great “O” Antiphons will be published by Biretta Books and sample copies are available immediately from Nicholas White.

O Wisdom, coming forth from the mouth of the Most High, reaching from one end to the other, mightily and sweetly ordering all things: come and teach us the way of prudence.

O Adonai, and leader of the House of Israel, who appeared to Moses in the fire of the burning bush and gave him the law on Sinai: come and redeem us with an outstretched arm.

O Root of Jesse, standing as a sign among the peoples; before you kings will shut their mouths, to you the nations will make their prayer: come and deliver us, and delay no longer.

O Key of David and sceptre of the House of Israel; you open and no one can shut; you shut and no one can open: come and lead the prisoners from the prison house, those who dwell in darkness and the shadow of death. 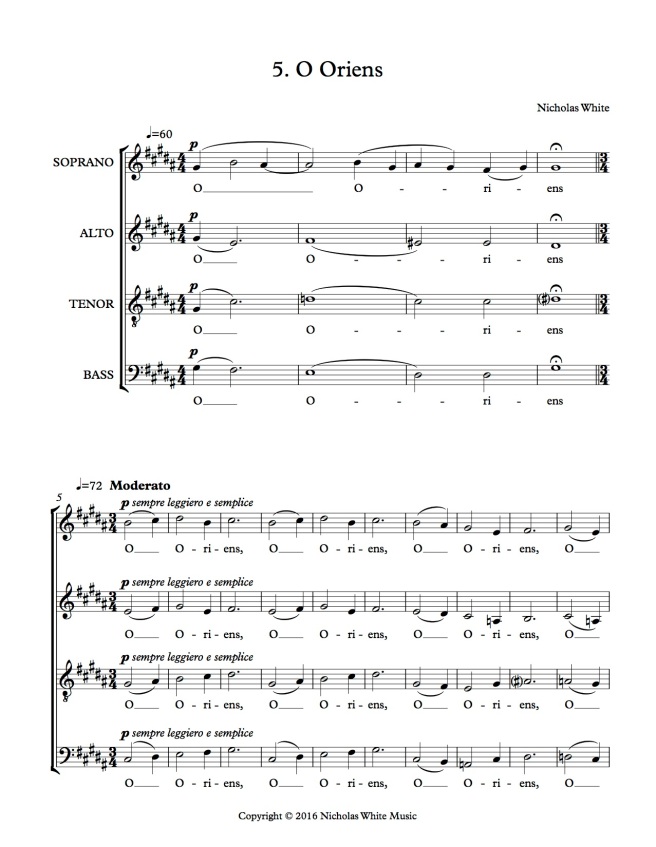 O Morning Star, splendour of light eternal and sun of righteousness: come and enlighten those who dwell  in darkness and the shadow of death. 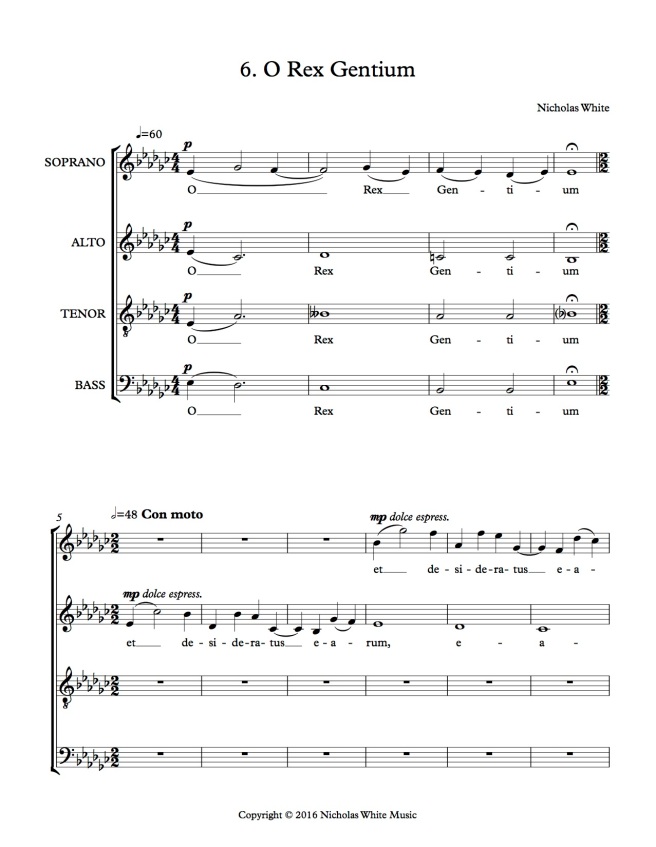 O King of the nations, and their desire, the cornerstone making both one: come and save the human race, which you fashioned from clay. 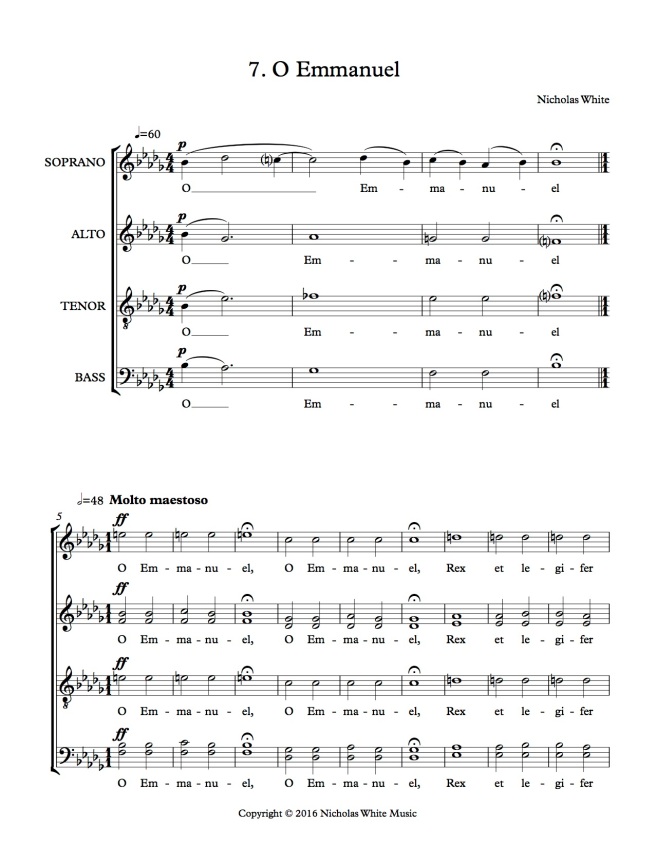 O Emmanuel, our king and our lawgiver, the hope of the nations and their Saviour: come and save us, O Lord our God. 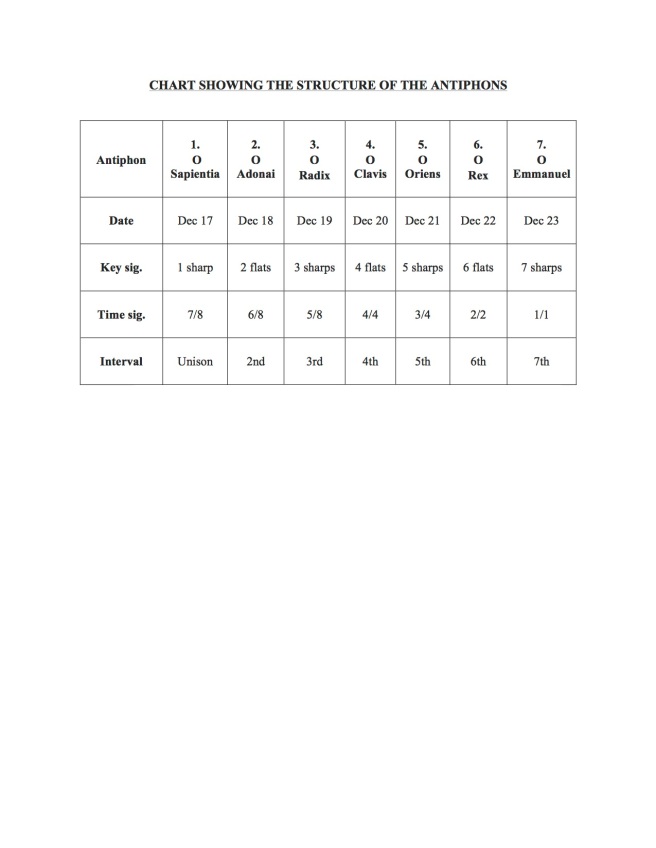